Headquarters of the Etisalat telecommunications company. 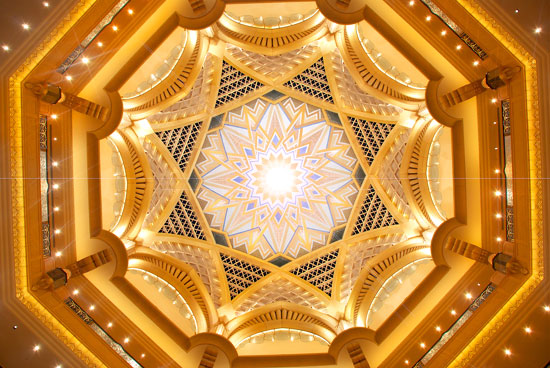 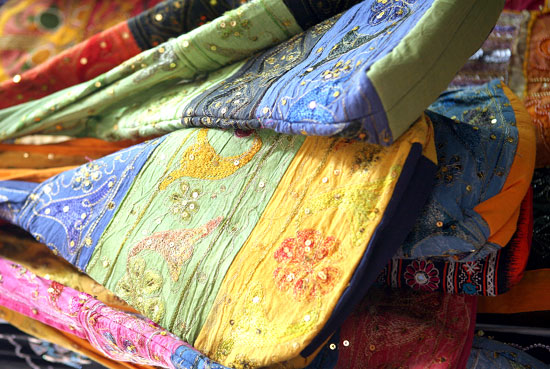 On Karamah Street, you can find Emirati textiles and see how they are made. 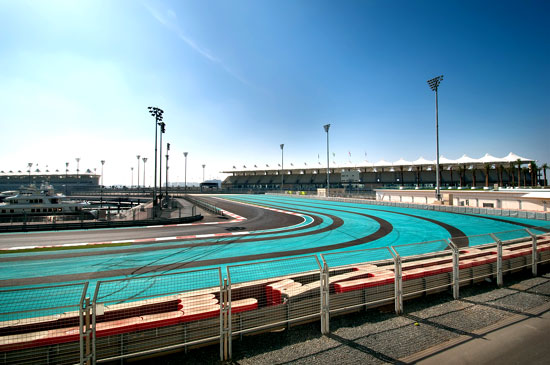 The al-Ain and al-Maqtah bridges connect the mainland to the wedge-like island Abu Dhabi dominates. The city center, where most of the tourist attractions are located, occupies the broad end of the wedge. Airport Road (aka al-Maktoum Street) bisects the city from west to east, culminating in al-Ain Bridge. The fact that some streets bear more than one name can cause some confusion. It's useful to know that roads with odd numbers run east-west across the island while those with even numbers lead north-south.

"Bustling" is the word that immediately leaps to mind when you arrive here. The fetching Corniche walkway that overlooks the Khor Laftan Sea extends across the north coast from the headquarters of the Arab Monetary Fund to the Hilton Hotel. Joggers, skateboarders, in-line skaters, and cyclists zoom up and down it at all hours of the day. Lush gardens featuring all manner of desert plants, as well as a tight concentration of towering, upscale hotels, surround the walkway, creating an atmosphere of wealthy elegance.

The roundabout on Sheikh Rashid bin Saeed al-Maktoum Street lies at the district’s heart, and it’s here that you’ll begin to get a glimpse of historic Abu Dhabi. In this area you’ll find a cluster of less plush but arguably more authentically Arabian draws: antiques shops, sheesha bars, arcades, and the shaded, Bedouin-style Gold Souq, where you’ll find bargains galore on all kinds of precious artifacts. Directly to the west of the roundabout lies an anachronism in this highly contemporary city: al-Hosn Fort was built in 1763 to defend Abu Dhabi’s source of water from marauders. On Zayed the First Street, arched colonnades leap above the tranquil gardens of the Abu Dhabi Cultural Foundation, a place where all comers can enjoy Arabian theatre, dance, music, poetry readings, and exhibitions. Sheikh Zayed the Second Mosque’s bulbous domes and needle-thin minarets soar skywards next door.

To the west of here you’ll find the brightly lit late-night shopping neighborhood of Hamdan Street, crammed with high-rise department stores and supermarkets, while its side streets host patisseries, independent tailors, and small mosques.

Mina Zayed, a coastal pearl-trading village until the discovery of oil, dominates the northwest promontory of Central Abu Dhabi. Now a bustling trade port, Mina Zayed sees over two thousand ships a year import and export processed foods, grain, agricultural commodities, and pharmaceuticals. Off the coast opposite the Sheraton Hotel, maritime heritage thrives in the form of the Dhow Harbor, where tourists can watch or even ride one of these traditional Arabian flat boats. Once you’ve done with watching dhows, head to the Iranian Souq, a fine symbol of Abu Dhabi’s significant Iranian community and the place to buy intricate Persian rugs, Middle Eastern spices, and beautiful souvenirs. These commodities are shipped over from Iran on a regular basis. To the north of Corniche Road stands the centuries-old Fish Souk, where you can buy the very best of Abu Dhabi’s grouper, oyster, prawn, and lobster catches.

You might think of Abu Dhabi West as the Beverly Hills of the United Arab Emirates. The upper-class elite, including the sheikhs themselves, dwell in enormous mansions and villas here, and the expatriate community has a strong presence. Young professionals inhabit the exclusive condo blocks lining the streets. The nation’s best schools, nurseries, and hospitals stand along the leafy boulevards of Zayed the First Street and Bainunah Street. But the region holds more than modern conveniences and plush mansions. On the west coast there have been attempts to showcase the city’s older customs with such attractions as the Dhow Building Yard, where visitors can watch men at work constructing these unique vessels, and the Emirates Heritage Village, which features demonstrations of tribal crafts and wonderfully manicured gardens.

Just south of here along Corniche Road, the concrete gives way a little to a development called al-Gurm. Here, smaller houses and hotels have been built into the sand dunes and mangrove groves.

The southwest corner of the district, Ras al-Akhdar, constitutes something of a leisure zone. Locals and tourists alike enjoy the walled, women- and children-only al-Dana Ladies’ Beach and Bateen Jetty. Monumental malls such as Marina mix high technology with vintage architecture. The 80-hectare (198-acre) Emirates Palace Hotel, with its ornate star atrium, and the daunting Presidential Palace, bring architectural grandeur to this neighborhood. Head to Ras al-Akhdar to view Abu Dhabi’s skyline in all its luxuriant and varied richness.

Khalidiya, the neighborhood at the heart of this district, holds two large public parks, making it a kind of pastoral oasis in the urban desert. Its sidewalk sheesha lounges, coffee houses, rug shops, and bakeries give it a bohemian atmosphere.

This flourishing suburb occupying the eastern half of Abu Dhabi’s wedge layout is dominated by the two main roads leading to the bridges to the mainland, Airport Road and Coast Road. An Etisalat (the state telecom corporation) building surmounted by its distinctive spherical radio tower stands on the region’s eastern border, while the staggering five-star Shangri-La Hotel marks the western border. If you’re hungry for some highly physical fun, head to the Armed Forces Officers Club, which has nothing to do with the armed forces at all, but does enclose a gym, spa, football pitches, volleyball courts, and an Olympic-quality shooting gallery.

Al-Mushrif terminates at Maqta Bridge, which rose up in 1968 as part of the fast, oil-enabled renaissance of Abu Dhabi. Before then, visitors to the city had to wait until the tide was low and wade across from the mainland. A watchtower remains from the days when Abu Dhabi had to be closely guarded from pirates and bandits.

Many smaller islands in various states of development cluster around Abu Dhabi. Yas Island hosts a Formula 1 racing event as well as an amusement park focused, oddly enough, on the Ferrari. Here you can play car-related arcade games and enjoy the displays concerning the history of the Italian automobile company.

Until 1975, Umm an-Nar held little besides an oil refinery. Then archeologists unearthed an ancient crypt dating back 5,000 years. Now the island hosts an impressive archaeological exhibition telling the story of ancient trade between these islanders and visitors from South Asian civilizations and Mesopotamia.

Development of a number of world-class museums and cultural centers is underway on Saadiyat Island.