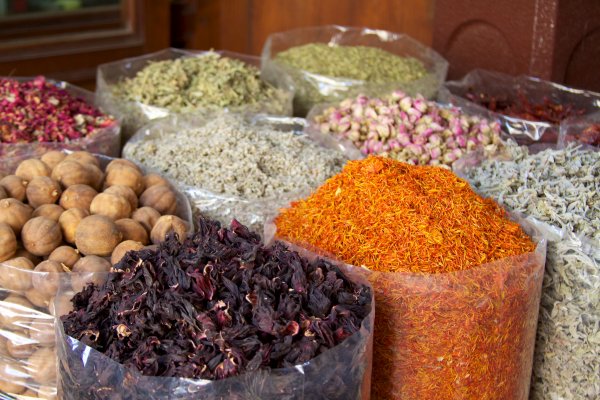 A spice market in Dubai

The cuisine of the United Arab Emirates is primarily Arab with noticeable influence from the neighboring countries of Oman and Saudi Arabia. It also reflects Asian and Middle Eastern cuisines as well as Indian elements, especially in the variety and amount of spices used. Most of the UAE’s traditional dishes are based on meat, grains, camel dairy, rice, fish, and spices.

As in other Arab countries, lamb and chicken are the most common meats, and fish is a daily food in coastal areas. Samak magalee (makli) is a traditional dish of marinated fish that is fried crispy, often served with rice and a salad or tomato sauce. Beef is a little more common than in other Arab countries, although lamb and chicken are still much more favored, and pork is taboo for Muslims.

Specific dishes are very similar to those found in other Middle Eastern countries, but are more highly spiced. Stuffed roast lamb, for example, is a favorite dish for serving to honored guests in most Arab countries. In the Emirates the meat is normally marinated in bezar before cooking. Shawarma, like a Turkish doner kebab or Greek gyro, is prepared from thin slices of stacked meat roasted on a vertical spit.

Rice and wheat-based breads are commonly served as side dishes. Breakfast usually features breads such as raqaq (traditional unleavened flatbread), khameer (sweetened flatbread), and chebab (pancakes) with cheese, eggs, or date syrup. Dairy products including yogurt and buttermilk, often made from camel’s milk, are daily staples. Robe, a type of whole-milk yogurt, accompanies most meals.

Vegetables such as cucumbers, tomatoes, eggplant, carrots, and potatoes feature in many recipes, particularly stews and salads. Salata khadra is a mixed salad made with diced cucumber, tomato, onion, garlic, mint, cilantro, and parsley in a tangy lemon juice and olive oil dressing. Tabbouleh, a common appetizer, is a parsley salad sprinkled with whole wheat, tomato, onion, and lemon juice.

Local fruits, eaten mainly as snacks, include mangoes, dates, and melons of all kinds. Dried limes, called loomi, a flavoring most used in Iranian cooking, also are a common ingredient in the Emirates. Popular beverages include fruit juice, camel milk, tea, water, qahwa (coffee), and fermented milk called leben or laban. Drinks are often flavored with cardamom, saffron, and/or mint.

Sweets and pastries are common snacks, often served with coffee to guests, or in smaller quantities at the end of a meal. Milk, butter, and rice- or wheat-based puddings are common. Sweets soaked in syrup also are popular, and many of those bear some resemblance to Indian fried and sugar-soaked sweets.