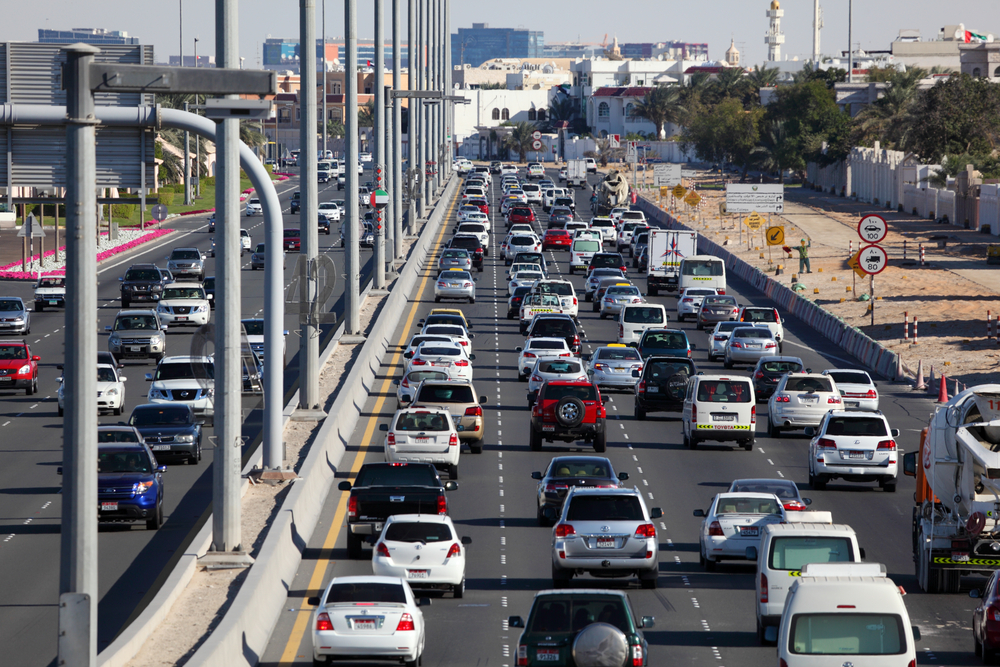 Traffic On Highway In Abu Dhabi

Located on an island on the Arabian Gulf, the city of Abu Dhabi is linked to the mainland by the Maqta and Musaffah bridges. The main roads in the city are the Corniche, the city’s popular waterfront promenade, and Sheikh Rasheed bin Saeed al Maktoum Street, or Airport Road, which is perpendicular to the Corniche.

To reach Dubai, take Highway 11 (Sheikh Maktoum Bin Rashid Road, also called the Abu Dhabi-Dubai Road) northeast. Driving west on this highway will take you to the Saudi border. Highway 22, or the Abu Dhabi-Al Ain road, leads, predictably, to the emirate’s other city of Al Ain on the border with Oman.

The police emergency phone number and ambulance number is 999. Mobile phones are widely used throughout the United Arab Emirates (UAE), and passersby will usually request emergency police and medical services quickly if they see that you need help. Response time by emergency services is adequate. However, medical personnel emphasize transport of the injured to the hospital rather than treatment on site.

Traffic accidents are a leading cause of death in the UAE. According to the World Health Organization, the UAE has the highest rate of road fatalities in the Middle East and one of the highest rates in the world. Drivers often drive at high speeds. Unsafe driving practices are common, especially on inter-city highways. On highways, unmarked speed bumps and drifting sand create additional hazards. Driving by foreign visitors not familiar with the stressful road conditions in the UAE is not recommended. Pedestrians should also use great care on the roads of the UAE—over 25 percent of road fatalities are pedestrians.

Countrywide traffic laws impose stringent penalties for certain violations, particularly driving under the influence of alcohol. In the UAE, there is zero tolerance for driving after consumption of alcohol. Persons arrested for drinking and driving are often jailed for many days as they await a court hearing. Penalties may include hefty jail sentences, fines, and, for Muslims (even those with foreign citizenship), lashings. Persons involved in an accident in which another party is injured automatically go to jail until the injured person is released from the hospital. Should a person die in a traffic accident, the driver of the other vehicle is liable for payment of compensation for the death (known as dhiyya), usually the equivalent of US$55,000. Even relatively minor accidents may result in lengthy proceedings, during which both drivers may be prohibited from leaving the country.

In order to drive, UAE residents must obtain a UAE driver's license; foreign driver's licenses are not recognized. However, non-resident visitors to the UAE may be authorized to drive using a valid driver’s license issued by his or her home country or state. An international driver’s license is no longer required for these visitors. The UAE recognizes driver's licenses issued by other Gulf Cooperation Council (GCC) states only if the bearer is driving a vehicle registered to the same GCC state. Under no circumstances should anyone drive without a valid license.

If you are in an accident, UAE law mandates that you remain at the scene until authorities arrive. The use of front seat belts is mandatory in the UAE. Driving is on the right side of the road. Speed limits are posted. Making a right turn on a red light is not permitted unless there is a special lane to do so with a yield sign. Parking is not allowed where the curb is painted black and yellow. Digital cameras for registering traffic violations, including speeding, are used extensively on Emirati roads. Talking on a mobile phone while driving is illegal in the UAE.

Several of the major international car rental companies have locations in Abu Dhabi, including Avis, Budget, and Europcar. Car rentals are available at major transportation hubs like the airport and train stations, as well as at many large hotels. Advance booking is recommended for better pricing. Ask your travel agent or hotel staff for more information.